Interestingly enough, the most fascinating game I’ve ever played isn’t a big-name title or even a particularly well-known one.  It’s a small, independently developed project that I bought in a pack of six or seven others as part of a Humble Bundle sale.  In many ways, it’s a very ordinary game, but in so many other ways, it’s an absolutely phenomenal piece of art.  It has, of course, it’s share of flaws, but it is, as my brother noted when he played it last week, “…the most nearly perfect game I’ve ever played.”

The game is called Bastion. 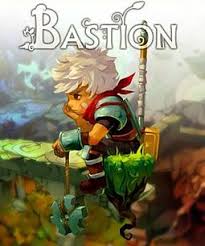 Kid sits on floating rocks all the time. (PC: Wikipedia)

I debated whether to review this game or the MYST series this week.  (I’m trying to do more regular blog posts, as I am not taking classes this summer).  Both, I feel, are excellent games that could use more attention.  But as much as I love Cyan’s exploration games, and as gorgeous as their games are, they still lost out to this guy.  Plus, I haven’t played Myst V yet, and I should really do that before I talk about the series.

Bastion is an action/adventure game produced by SuperGiant games–their first and only title, in fact.  The game is set in a strange fantasy/western/flying island steampunk world, and follows the character of a white-haired boy, referred to the narrator only as “the Kid,” as he struggles to survive in the wake of an apocalyptic event known only as “The Calamity.”  In some ways, the plot of the game is very straightforward–the Kid must locate and retrieve the seven Cores (and after that, the seven Shards) in order to complete the Bastion, his people’s back-up plan.  The task requires a fair amount of slashing and shooting, in true Action/Adventure style. 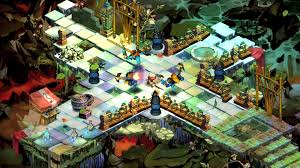 However, that summary leaves a GREAT deal to be desired, and makes the game appear much more typical than it is.  Certain levels are fascinating in how they play with your mind and defy expectations… even sometimes expectations raised by the game itself.  (I used to have more here detailing exactly how, but realized that kind of ruined the point)The game also has many original takes on old devices.  There is no “easy,” “medium,” or “hard” settings, just a in-game device that allows you to make enemies harder in very specific ways by invoking specific idols.  There is a “wave attack” mode of play, but it is expressed as a dream sequence that is used to explore the characters backstories.  Like most rpg-style games today, you can replay the game with all your acquired weapons and talents (like Mass Effect), but its significance is a bit… different here.

The style of the game is particularly notable.  Just from the image, you can see the lush world the character inhabits.  With the exception of a few areas, everything–despite the Calamity–is bright and colorful, and the backdrops to the gaming platform provide a magical atmosphere.  The game never bothers to explain why the world is floating in the air, nor how the Kid can travel from level to level simply by being blown up by the winds, nor why paths form themselves as you approach.  And it doesn’t need to.  It’s taken as a natural part of the strange world the Kid inhabits.

The music, too, is beautiful.  Each level has their own soundtrack, fitting with that level’s atmosphere.  iTunes struggles to classify the music, describing it as “acoustic Frontier trip-Hop,” as if anyone even knows what that is.  It’s heavy on rhythm, but there’s a definite western twang to most of the music.  And the numbers sung by the different characters in the game are hauntingly beautiful.

This song actually gets a little creepy once you learn what she’s singing about.

But where this game really shines is its narration.  Narrated games are not uncommon–Dragon Age 2, for instance, or the Bard’s Tale, both have narrators who comment on the action the player is performing.  Neither, however, is as completely narrated as Bastion.  The entire game is narrated by a secondary character, Rucks, who describes the actions and choices of “the Kid” as the player carries them out.  Sometimes the narration is conditional to the action–the Kid retrieving Cores–sometimes it is unrelated but expository–talking about the history of Caelondia–and sometime it is incredibly detailed commentary on a choice the player has made–there are specific comments for every possible combination of weaponry.  Rucks, voiced by Logan Cunningham, has an absolutely delicious voice, and delivers his clever lines with a husky hard-boiled tone that makes it a joy simply to listen to him.  Apart from a surprise at the end, Rucks is the only character who speaks in the game, but he does it so well he utterly carries it off.  Who Rucks is telling the story to, and in what context, is something that is revealed as the game goes on.

All this in a game by a minor developer on their first foray into the world of games!  The game has hardly the enormous scale of Half-Life or Mass Effect, but that serves it well in this stead (and means it is less likely to be abused by a grad student who should really be working instead of playing games.)  It’s not perfect–several of the game’s optional “challenges” are insanely difficult while others are insultingly easy.  But those are minor gripes that can easily be ignored. I look for great things from Supergiant, and am already eagerly following the development of their next game.

Play this game.  It’s only fifteen dollars, and it will re-awaken that long-lost sense of whimsical imagination that captured you when you played your first video game.  It will give you hours of entertaining play without addicting you.  And it will blow your mind in terms of how games ought to be made.

3 thoughts on “Perhaps the Greatest Game.”