It seems a little cheap, maybe, to write a review of something like the Hobbit, even if it IS an awesome book, and even if it IS the most recent thing I read, and even if it DID recently enter production to make a movie (after many complications from unions and bankrupt movie firms). So instead, I’ll just ramble on in general about Tolkien and what an awesome guy he is.

First, what got me started on this kick.  The Hobbit, as I said, has finally started to be worked on.  You can read about the cast and so forth here.  I’d be more delighted about this if I weren’t worried that LotR will fall victim to “sequel mania” and end up coming out with something like Lord of the Rings 4: The Revenge of Sauron or some other equally ludicrous idea.  Seriously, there’s room for PLENTY of epic stories in the Tolkienverse, but some things just shouldn’t be put onto film.  In all honesty, plenty of my friends still aren’t too thrilled about Jackson’s adaptation.  I think they’re pretty awesome myself, but awesome for wholly different reasons than the books are.

Anyway, I got excited about The Hobbit, so I watched the animated movie…

And played the video game… 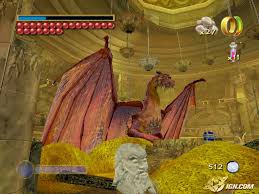 And finally read the book.  BOY am I lame.  In my defense, the animated movie has some pretty awesome music and has a certain whimsical charm to it.  At the very least, it’s better than the animated Return of the King that was later made.  And the video game, as a video game, succeeds very well, providing enjoyable, explorable environments and realistic worlds.  The Great Hall with Smaug is one of the most awesome moments in the game, and you cannot imagine how much fun it is to go exploring around the Lonely Mountain.

But, of course, the book is the original and is simply SO much better than either.  The Hobbit is a far more innocent and lighthearted tale than Lord of the Rings, but it still has the amazing depth to its world and the unmatched beauty of it’s language and description that neither game nor movie can really match.  It doesn’t help that some of the coolest moments–Beorn’s hall, Thorin’s great charge, etc.–are included in neither adaptation.  Seriously, reading the book got me so excited, I went and drew a picture of one of the most awesome moments… Thorin’s great charge in the Battle of Five Armies.

A little self-serving, perhaps, to stick something like this up, but I worked on it for a while, and I’m rather proud of it.  Neither adaptation seems to remember that Thorin is more than a pompous greedy warmonger, he’s also a first-rate warrior.  I wanted to capture that.

Tolkien has always been a favorite of mine.  Probably one of my biggest influences, along with Star Wars, which sounds sorta lame, but it’s true.  And really, Tolkien is an excellent model to have.  He wrote with an incredible poetry of language (he actually considered himself more a poet than writer), and described an entirely separate world with such reality and relatability that it really chills your blood at times. Or at least it does to me, I know plenty of folks who think the whole thing is ridiculous.  It gets even better when you dig into Anglo-Saxon and Norse lore and realize how much of Tolkien’s themes are taken from old lays and legends.  Really, Tolkien is rewriting the oldest stories in a new world, and this becomes really apparent when you read something like The Silmarillion, which just drips with epicness and myth.

Fantasy work generally isn’t considered academic stuff, and in all the English courses I’ve taken, only one has actually handled Lord of the Rings.  For some reason, general studies of English Literature just sort of skim over it, as if it wasn’t an enormous influence on literature and fantasy in general, or that it doesn’t exhibit all the qualities of fabulous writing.  Of course, maybe it DOESN’T, and that’s just all me being an unbelievable fanboy.  But at times the distinction between “Academic” and “Non-Academic” works seems rather arbitrary.  Gulliver’s Travels is fantasy in it’s own way, as is Dracula and half of the Jules Verne stories.  And Beowulf IS fantasy, plain and simple, it’s just really old fantasy, or rather, the stuff that most modern fantasy is based off of.

This is an issue to me, because, as Tolkien is one of my major influences, I tend to write and study fantasy and sci-fi, neither of which are very popular in the world of academia, the same world I’m hoping to enter in a few years.  I like to write fantasy stories, but I can’t send any to universities or to academic journals, simply because they’re not interested in that sort of stuff.  It’s not “real.”

In a way, I can see their point.  The advantage of fantasy is that you don’t have to make it conform to reality.  You can create a whole world, a whole situation, a whole history, even a whole species that has absolutely no bearing on real-life problems or on the nature of humanity in general.  This is actually one of my major complaints with Star Trek.

But, I feel, because of that dissociation of outward reality, there is a greater need for inner reality–for consistent and realistic humanity in the characters, for underlying themes of life that are common to all.  If you don’t have those, the audience is bound to loose touch with the story, after all.  The genre of Fantasy probably renders it easier–and cheaper–to bring those things out, but it doesn’t necessarily mean that the author TAKES that easy route.  There are good and bad fantasy novels just as there are good and bad stories of any area.  The academic attitude toward them seems like snobbery, in my opinion.

Anyway.  Started talking about Tolkien and ended up with this.