This weeks readings on aural rhetoric were intriguing, particularly as I did all of them while listening to music.  This fact strikes me not because it is particularly unusual–most of my friends listen to music while they work, and some watch movies–but because I very specifically do NOT listen to music while writing or drawing, on the basis that it affects my concentration.  Whether or not this is accurate is hard to say, but I think it is a somewhat disturbing commentary on my priorities that I worry about my concentration when writing or drawing (my hobbies) but not when reading or studying (my job.)

Bump Halbritter is a great name, and the article was equally interesting.  I’ve been a fan of movie soundtracks for a long time, even when those movies amounted to little more than Muppets take Manhattan.  I first discovered Braveheart and Gladiator through their impressive scores, and Tim Burton for a long time was little more to me than the guy who produced Danny Ellfman’s music.  And, of course, the Lord of the Rings soundtrack will forever hold a special place in my heart.  With that in mind, Halbritter’s use of soundtracks to demonstrate aural rhetoric was particularly interesting.  I was aware of the different significance of different kinds of music, of course, having taken a course on classical music in college, but still the examination of what makes the “Jaws” soundtrack so compelling was fascinating, and I’m sure must have been equally interesting in class.  It strikes me as a fun exercise that would quickly get the students’ attention, and I would like to try something similar, if perhaps with different films.

However, I also feel the moderate this love with another observation.  Sons of Anarchy, an acclaimed TV series that I watch on occasion, is notable specifically for its LACK of any kind of soundtrack. 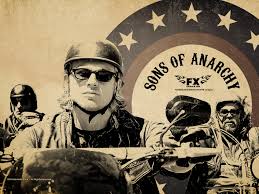 While ordinarily I would consider this to be a weakness, even a fatal one, the show uses it to great effect, to depict a grittily realistic–and in many ways purposeless–world.  One of my favorite video games, Half Life 2 (Which I’ve talked about before), uses no music at all, save in action-appropriate contexts, when it is used to give a sense of adrenaline to the game.  Again, this makes the game feel very real, as opposed to a game like Mass Effect 3, (talked about this series before too) which has an impressive soundtrack, but at the same time never has the same feeling of gritty reality.

This suggests (as I’m sure Halbritter would agree) that while there is an aural rhetoric, there is also an anti-aural rhetoric–a certain effect achieved by no sound whatsoever. Music can direct a scene, but lack of music can depict a directionless and frighteningly realistic world.  In the real world, there are no soundtracks.