Just to be clear, that title is not referring to a two-headed lady made of tomatoes.  Nor, for that matter, is it talking about a female tomato with two heads.  No, it’s about a lady who sells tomatoes.  And has two heads.

What does that have to do with anything?  Well, we’ll get there.

I’m still on something of a Tolkien kick, but this week I managed to distract myself with some Pirates of Caribbean music and a series called Discworld that my brother got me into.  It’s a fantasy series by Terry Pratchett, and it’s pretty hilarious with a surprising amount of depth.  I’ll probably review it at some point.

In the interests of relevance, I should also mention that last weekend I went to see “Voyage of the Dawn Treader” with my brothers and sisters. 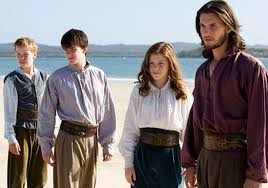 It’s an entertaining view, though it’s not exactly a blow-your-socks-off movie like “The Lion, the Witch, and the Wardrobe” was.  (Does anybody know: do you use italics or quotes to denote movie titles?)  Naturally, they change the story slightly, so it’s got a bit more urgency than: “We must find the seven missing Lords.”  Instead, it’s something along the lines of “We must find the SWORDS of the seven missing Lords and lay them at Aslan’s Table or green mist will consume the world.”  The quest itself seems suspiciously like a bad Legend of Zelda plot, but the story more or less follows the Lewis original, so it’s not really that bad.  The new actor Will Poulter does an excellent job of portraying the snobbish Eustace Scrubb, though regrettably we never see much of him as a reformed character, so it’s hard to say if the actor can be anything but snobbish.  Still they made a very good dragon out of him.  In my opinion, the movie could have used more Dufflepuds, but outside of that it’s a very good movie.  If you have the choice, though, see it in 2-D… the 3-D doesn’t really add much, and some find it annoying. 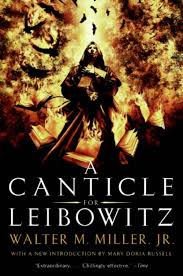 ‘Canticle,’ for those not in the know, is a holy song of praise, ‘Leibowitz’ is a fictious nuclear physicist. However,Canticle for Leibowitz, despite its title, is NOT a holy song in praise of nuclear physics.  Sorry, all you atomic buffs out there.  Rather, it is one of the most underappreciated works of literature out there.

This is probably unfair of me to say, as I cannot honestly confess to have read all the works of literature in the world, especially not the underappreciated ones.  Nevertheless, if I had, I honestly believe this book would be among them.  In fact, if the book was not science fiction, and if academia did not have the snobbery it does against such things (see previous entry), I think it would be included in most general studies.  To demonstrate this, I need only mention that when the book first came out, critics tried to term it a ‘novel’ instead of the science fiction story it obviously was, because it was considered too good for the science fiction genre.

Word of disclaimer before we go further.  Canticle for Leibowitz was the book I wrote my honor’s project thesis on, so I tend to ramble on and on about it.  If I had to, I could probably write a fifty-page paper about the thing.  (Oh wait, I did).  In fact, it’s largely my study of it that aroused my realization of the importance of the Communion of the Saints.  So this review might take a while.

First off, as quick a summary as I can manage.  Canticle for Leibowitz is a book made up of three stories, each separated by roughly 500 years.  They follow the Order of Leibowitz, a monastic order dedicated to preserving works of literature and science.  I should probably mention that all this is after a nuclear apocalyse has destroyed most of the world, and by this point, most of the monks do not even know what the blueprints they’re copying signify.  But they copy them, because that’s what their order is for… preservation of the artifacts of the Pre-Nuclear War world.  They’re called the Order of Leibowitz, by the way, because their founder was a former nuclear physicist named Leibowitz, hiding from the anti-science mobs in the days shortly after the wars.

So that’s your background.  The first story, Fiat Homo, tells the story of Brother Francis, a hapless novice of the order who discovers a nuclear bunker and the blueprints it contains.  He brings them back to the order and, after much political wrangling, not only copies them but delivers them to the pope, in honor of Leibowitz finally being declared a saint.  Francis, who actually has some scientific inclinations, gets a hint of the significance of the blueprints, but never fully realizes it.  Nonetheless, he copies them, amidst the ridicule of other, more secular monks of the order.

The second story, Fiat Lux, takes place 500 years later.  Governments are starting to arise, and one in particular is beginning to take over the other city-states.  The Order tries to stay out of it, but the documents they’ve preserved for so long are finally beginning to attract secular attention, in the form of the scholar Thadeo, who visits the monastery to be astounded by the wealth of information they have there (as well as the working light bulb they’ve developed from the documents).  There’s some wrangling about the proper application of technology and it’s relation to morality/religion, but at the end of the story the secular scholar returns to the aggressive city-state and the Order is overrun by its armies.

In the third story, Fiat Voluntas Tua, the Order is still around, but it, as well as the church, has been robbed of any political or moderating influence in the world.  It’s now just a defunct monastery that the government simply pays no attention to as it heads merrily on it’s way to another nuclear apocalypse.  The monks, who are immersed in the history of their documents, see the apocalypse coming but are powerless to stop it.

It’s in this context that we meet our famous tomato-selling lady with the two heads.  One of them is called Rachel, and the other is Mrs. Grales, though Mrs. Grales pretty much does all the talking.  ‘Rachel’ is actually just a mutation caused by the radioactive fallout from the first nuclear war.  She’s a parishoner of Abbot Zerichi (Mrs. Grales, not Rachel), and right up until the end, seems relatively unimportant.

The monks, in the meantime, despite being powerless to stop the apocalypse, DO have a back-up plan, in the form of a starship.  Monks (and nuns) in a starship.  How is that not awesome?  Their plan is to escape earth and fly to the space colonies, continuing to retain the documents they have preserved for so long, and also keeping the church alive.  Markedly, as the last monk gets aboard the ship, he takes off his sandals and kicks the dust from them.  The world has rejected the word, and they are condemned for it.

And Mrs. Grales?  Mrs. Grales comes to Abbot Zerichi as he lies dying in the ruins of the monastery.  Or rather, Rachel comes, as Mrs. Grales is now dead.  Rachel, the other head, has a childlike innocence, and seems to be impervious to the effects of the radiation blast.  Despite all humanity has done, humanity continues to survive.  The world is not dead.

Doggone it.  This was supposed to be a short summary.  Ah well.

In my paper, I wrote that the book implied a vicious cycle, implying that man never really learns the error of his ways, and at the same time emphasized the communal nature of the church, trying to show man said error.  The Order of Leibowitz retains the information of the past and tries to convey it to a world that does not want to listen. In the first two books, the church is also a unifying force, trying to hold humanity together without war in the absence of any real government.  It’s when people stop listening to the church that they lose their unity and fall into war.

Of especial importance in the work, and especially in the middle story Fiat Lux, is the relation between the abstract and the applied.  The monks have held the abstract, the blueprints, for years, and the world is finally ready to apply them.  The monks also have the abstract, the ideals, of how the blueprints are to be applied, which the world is less ready to listen too.  The scholar doesn’t really consider the monk’s warnings about the possible results of carrying the information back to his warmongering ruler, he just wants to progress, regardless of direction.

Rachel is one of the most confusing aspects of the story, and shows just a hint of what you might call Christian humanism.  It’s heavily implied that she is a whole new kind of human, one not even perhaps in need of grace (she shies away when the abbot tries to baptize her, and indicates she does not need it).  After all, she wasn’t exactly born, so theoretically she’s not subject to original sin.  It’s worth noting, though, that if this is the case, it’s not something created from man’s worth, or even Mrs. Grales.  It’s something of a gift given to man despite man’s sin.

See, I SAID I could carry on forever about this work.  Despite it’s serious tone, it’s very humorous, especially in the early bits, and has a fascinating amount of historical data (as essentially it’s recreating history).  And, as I’ve made clear, the philosophy and speculation behind it is wonderfully deep, if a little obviously tinted by the Cold War.  I would inequivocably recommend this work to anyone.  It’s a very engaging and worthwhile read.